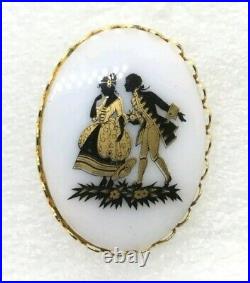 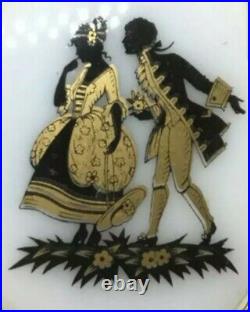 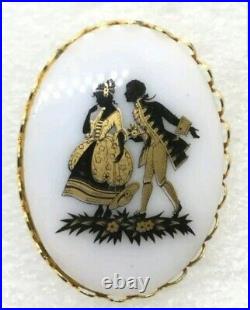 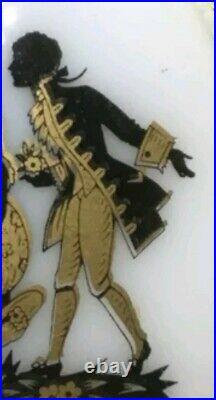 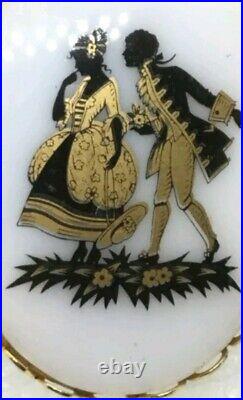 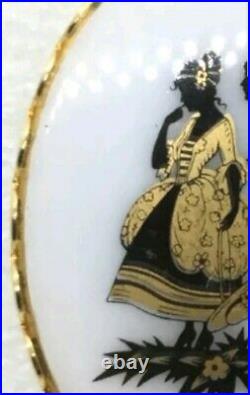 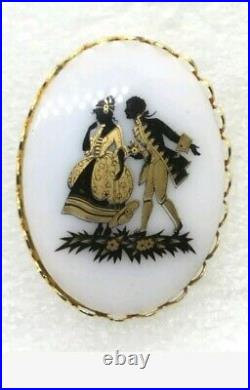 VINTAGE SERENADE CAMEO BROOCH /PIN. This Brooch depicts or captures a gentleman serenading a lady during the Victorian Era. Hand-painted gold & black Scene on milk glass. Cameo making began in the earliest civilizations of Egypt and Asia Minor. The Greeks and Romans refined the art form, and cameos became a must-have accessory thoughout Europe. The earliest known black cameo, in the relief of a woman of color, is the Blackamoor Cameo Habille made in England in 1850. Cameos such as the Cameo Habille are rare antiques. The most popular cameos today are carved in sea shells, a tradition that began in the fifteenth or sixteenth century and was popularized by Queen Victoria of England. Since that time, cameos have predominately showcased women's profiles, and been worn by women who enjoy the beauty and craftsmanship of hand-carved cameos. Yet cameos have not always been decorative jewelry for women. In fact, at different points in history they have been worn as frequently by men.

While the birthplace of the cameo was nearly 300 years before the birth of Christ in Alexandria, Egypt, cameos owe their origins to ancient carving traditions. As far back as 15,000 BC, petroglyphs - figures carved into rock - were used to record significant events and communicate information. In ancient times people used cameos to depict an ethic or moral, or to make a statement about their faith or loyalties. In the centuries since, cameos have been used for various purposes and decorated with a wide range of carvings.

Early Greek and Roman carvings featured images of gods and goddesses, themes from mythology, beautiful women and biblical events. A woman could wear a cameo depicting a dancing Eros as a seductive invitation to love. During the Renaissance, Pope Paul II was an avid cameo collector.

According to history, this love ultimately led to his death. His excessive display of carved gems and stones on his fingers kept his hands so cold that he caught the chill that meant his death. Cameos have been used on helmets and military accessories like breastplates and sword handles, on rings and other jewelry, and on vases, cups and dishes. Women began collecting cameos to prove cultural status during the Elizabethan period.

At the same time, tourist travels to the ruins of Pompeii were on the rise and women began collecting shell and lava cameos as souvenirs to remember their travel. Cameos enchanted Napoléon, who wore a cameo to his own wedding and founded a school in Paris to teach the art of cameo carving to young apprentices.

Not until the nineteenth century, when the popularity of shell cameos grew - reducing the use of hardstones or agate - did profiles become as popular a subject matter as they are today. This item is in the category "Jewelry & Watches\Vintage & Antique Jewelry\Brooches & Pins".

The seller is "bertrammcc" and is located in this country: US. This item can be shipped worldwide.