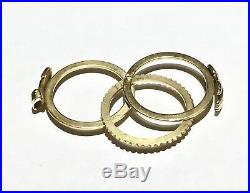 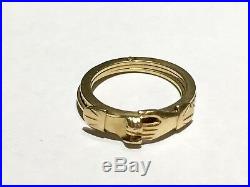 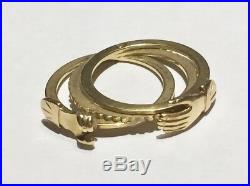 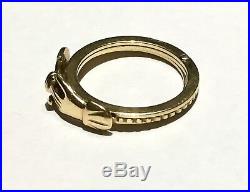 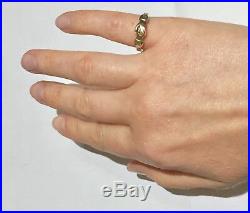 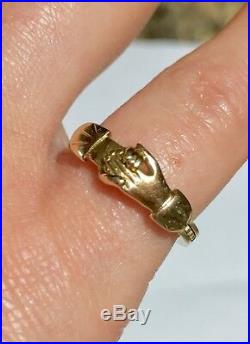 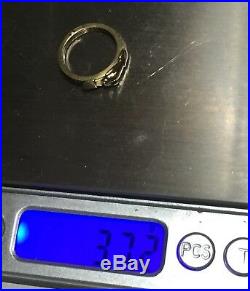 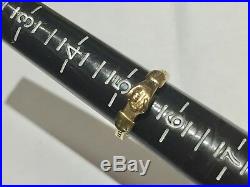 This is incredibly rare item and your chance to own a piece of history. The ring crafted in solid 14k gold. Well built and not thin - made to last! The ring in great original antique/vintage condition and all the opening/closing mechanism works well! Has very fainted hallmark for 14k. Currently size 5.5 USA, 3.72G.

Will arrive in a jewelry case and can be gifted immediately! Can be great wedding/engagement and even a friendship ring! Some info from popular sources. The symbol of two clasped hands is an ancient, sentimental design that has historically been associated with fidelity and marriage.

Interlocking "Fede" rings (from the Italian, for "trust" or "fidelity") or "Gimmel" rings (meaning "twin") were often used as betrothal tokens in 16th and 17th century Europe, but they remained popular until well after the Renaissance. The design of this ring has it's roots in Roman times and used as a symbol of friendship, love, betrothal. The clasped hands fede ring enjoyed a revival in it's popularity during medieval times. The gimmel, or gimmal ring derives it's name from the Latin gemmellus, or twins and during medieval times comprised of two bands which interlocked and were often used as betrothal rings. It wasn't until around 1600 that the gimmel ring began to incorporate the symbols of the fede ring, the clasped hands, and they would sometimes interlock to cover a single or double heart symbol, held on a third band. This style was very popular during the 16th and 17th centuries. The fede ring has a long history dating back to antiquity.

The major hallmark of this type of ring is the motif of two right hands traditionally one female and the other - male, clasped together. Known from the original Italian mani in fedeandrdquo; (hands in faith or trust), it was quite.

Popular during the Renaissance and given as a token of betrothal. The ring to symbolize the union of two people. A gimmal ring, or gimmel ring, is a ring with two or three hoops or links that fit together to form one complete ring. The name gimmal comes from Latin gemellus, twin, via Old French. [1] They were known as joint rings in Elizabethan England.

In the 16th and 17th centuries, such rings were fashionable in England, Germany, and other countries, and were often used as betrothal rings. The engaged couple would wear one hoop each and rejoin them to use as a wedding ring.

With triple link rings, a third person could witness the couple's vows and hold the third part of the ring until the marriage. An early gimmal band, consisting of two interlocked rings sculpted to form a single ring, is to be found in the Victoria and Albert Museum, dated to 1350. Henry III of England met the Count of Gynes in 1202 and gave him a gimmal ring set with a ruby and two emeralds. [2] Martin Luther wed Catherine Bora in 1525 with a gimmal ring inscribed "Whom God has joined together, Let no man put asunder". Around 1600, the gimmal ring began to sometimes incorporate the clasped hands of the fede ring and a third symbol, a heart, was added, sometimes with a third shank. Designs involving clasped hands, and sometimes a heart, remained popular after the Renaissance. The item "Victorian Fede Gimmel 14k 14Ct Yellow Gold Wedding Clasped hands betrothal Ring" is in sale since Thursday, November 14, 2019. This item is in the category "Jewelry & Watches\Vintage & Antique Jewelry\Fine\Victorian, Edwardian 1837-1910\Rings". The seller is "lilly_olinka" and is located in Andover, Kansas. This item can be shipped to United States.